We spoke to Mark Feeney, Director and Superintendent Pharmacist at Bannerman’s Pharmacy Kirkintilloch. 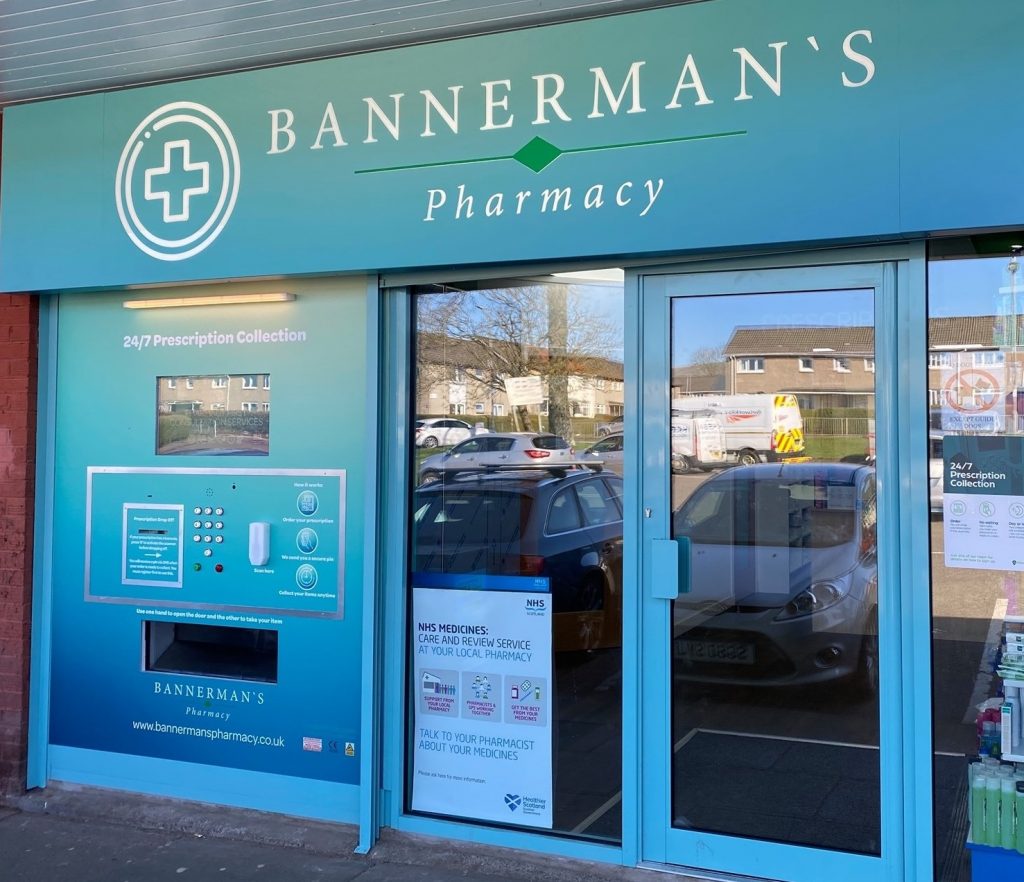 There are 3 pharmacies within the Bannerman’s group, Possil Pharmacy, Saracen Pharmacy and Kirkintilloch, where the MedPoint was installed.

We spoke to Mark Feeney, Director and Superintendent Pharmacist at Bannerman’s Pharmacy Kirkintilloch, about his recent MedPoint installation and how the machine has freed up space as well as staff time.

The MedPoint installation was finalised in March 2021 and the machine has integrated flawlessly with the existing Patient Medication Record (PMR) system in use on site.

Bannerman’s will be adding another MedPoint to another branch in coming months.

Tell us a little about Bannerman’s and your role

Bannerman’s is one of the oldest pharmacy chains in Glasgow and I originally joined the team as a junior pharmacist back in 2005!  I’ve worked various roles at the pharmacies over the years and in 2015, when the Bannerman family retired, I stepped up as pharmacy director.

There are 3 pharmacies within the Bannerman’s group, Possil Pharmacy, Saracen Pharmacy and Kirkintilloch, where the MedPoint was installed.

Our Kirkintilloch pharmacy is just outside of the town centre and approximately 30 minutes from Glasgow city centre. We’re a busy pharmacy with plenty of footfall from the surrounding residential areas.

What made you decide to install a MedPoint machine?

It was actually our PMR system supplier that initially mentioned MedPoint. I was intrigued as they told me it would integrate with our existing system, which was great as I wasn’t looking to change.

Another plus was that we were looking for a way to manage an increase in patients, without using more of our already limited space to store prescriptions.

MedPoint sounded like a more efficient and safe way for us to get prescriptions to our patients while freeing up space in the pharmacy.

Consultations and patient advice are key areas of focus for our team, and by installing a MedPoint, I knew my staff would have more free time to give quality advice to anyone who calls in to have a chat with us.

How have your staff benefitted from having a MedPoint?

It’s really helped streamline processes. We’ve not only freed up time, as staff are spending less time retrieving prescriptions, but we’ve freed up space too as the machine stores many of our prescriptions!

Staff really do have more time to focus on having quality conversations and providing care to the patients that need it most.

And what about your patients, what do they say about the MedPoint?

The main feedback we’ve received is that it’s great for people who work shifts as they no longer need to worry about our opening times – they conveniently have out of hours access to a service they need.

Some have also noticed that we do have extra time for them to call in and have conversations with us, which is great as we did want to clear more space for this exact reason!

How has it been working with the MedPoint team?

The team are very knowledgeable of the industry and have been really helpful throughout the whole process.

They knew the Scottish pharmacy scene well and understand that pharmacy innovation is very important to us as this is an area which is backed by the government.

They were able to put us in contact with contractors who knew the MedPoint machines inside-out, meaning installation was seamless!

They’ve also helped make introductions to other prominent contacts within the area which has been really useful.

Is there anything else you’d like to tell us about your experience?

Yes I would, it’s really made a difference for our pharmacy.

Another main thing for me is that this has been one of the easiest large-scale projects I’ve completed.

Everything arrived when it was supposed to, the installation took place when it was scheduled, over a weekend, and the training took place the following week, so we were able to start using the machine straight away without any delay!

Get MedPoint for your pharmacy

Find out how we can benefit your pharmacy today.