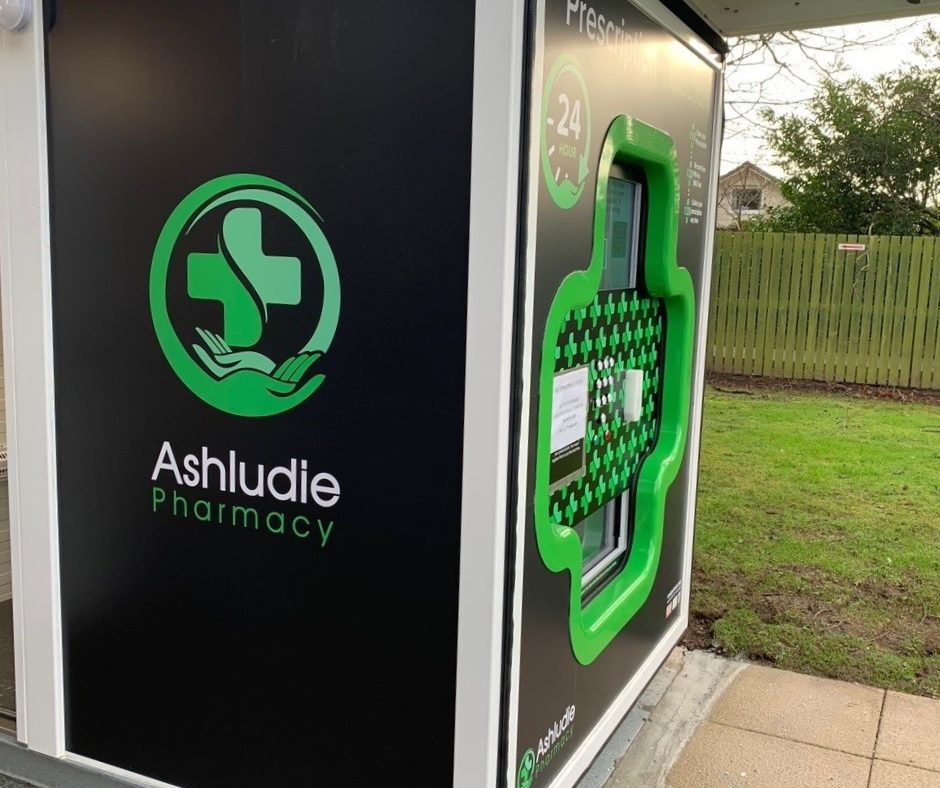 Ashludie Pharmacy is a chemist and NHS community pharmacy, providing Pharmacy First services among others, as well as an online shop.

Ashludie is a busy community pharmacy which opened in 2004. It offers a whole range of services to the people of Monifieth and the suburbs.

The pharmacy’s MedPoint launched at the end of 2021. Pharmacy owner Bryan Kydd hoped to support surrounding communities with a more convenient, accessible way to collect prescriptions from Ashludie.

What challenges did you face before installing a MedPoint?

One big challenge was the fact that we often ran out of space due to the number of prescriptions we were dispensing. Our prescription drawers were full faster than our patients could collect them, so our team spent a lot of time sorting and searching through them.

We open on Saturdays for a few hours, and we’d have very long queues of people wanting to collect when they weren’t at work. Our team therefore only had time to distribute prescriptions on Saturdays.

Staying competitive and relevant is always a challenge, so we were very keen to futureproof and install something that would make us stand out. Other pharmacies in the area weren’t offering 24/7 prescription collection so we saw it as an opportunity to differentiate ourselves.

How has your MedPoint helped you solve these challenges?

The MedPoint has reduced the Saturday surge and our queues in general, freeing up staff time. On a weekend we currently see 30-40 MedPoint prescription pick ups, which would take up to an hour and a half or more if done within the pharmacy.

Along with happy staff and patients, the machine has really helped us keep an eye on prescriptions that aren’t collected. When we load the machine it’s clear to see the items that haven’t been collected within our four-day timeframe.

It’s now much easier to identify who hasn’t collected and ask them why. Sometimes it’s as simple as they’ve forgotten, but other times we can see potential issues and help out. For example, the person may not feel they still need the medication, or are taking a lower dosage so don’t need to order as much. If this is the case, we can support with medication reviews.

The positive knock-on effect of those important conversations is that we can actively try to take some strain from the NHS, and save money by reviewing and adjusting people’s medication to suit them.

What do your team and customers think of the MedPoint?

Both love it. In the last year we’ve jumped forward a lot with our technology. We didn’t have a text service, then we got our website set up and we also have an app now. All of this together gives our patients more convenience, which they love, because it’s so quick and easy to order and collect their prescriptions anytime.

The MedPoint system has given us so much time back. As time goes on there are less queues and more people using the machine, so it’s working really well for everyone.

The MedPoint text service saves us money too as it’s free to send the messages to patients. It also means less people ring the pharmacy to find out if we have their prescription as the text has already automatically updated them.

Get MedPoint for your pharmacy

Find out how we can benefit your pharmacy today.